Success doesn’t fall from the sky 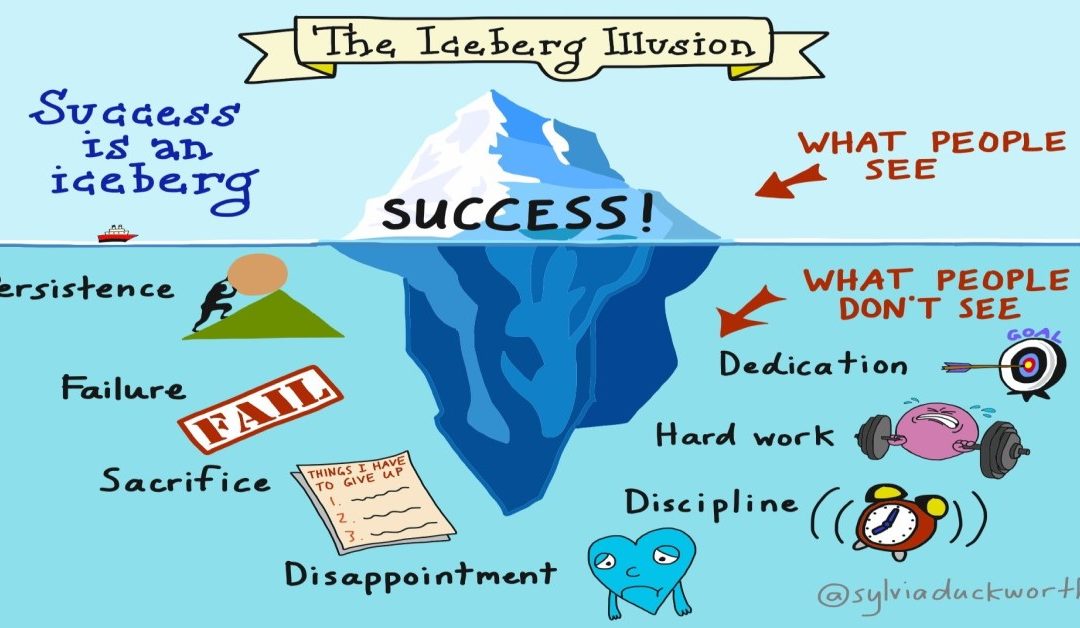 An iceberg is a marvellous thing. The mass of ice sticking out above the surface of the sea can be huge and quite awe-inspiring. But this is quite literally only the tip of the whole thing. What one doesn’t see is the much, much larger portion of the iceberg lying below the surface, invisible to most eyes.

Success is much the same as an iceberg. We see the glamourous part of someone else’s success, the awards won, the financial gain, the smiles, the awe in everyone’s eyes.

But we don’t always know what is lying unseen below the surface: the long, exhausting hours of hard work when everyone else is having fun, the battle to stay awake late at night in order to get some work done, the frustration when you’ve worked really hard and things just won’t work out, the disappointment when plans fall apart, the struggle to keep going when you are faced with failure time and again.

There is no such thing as an overnight success. There are no shortcuts to success. It takes determination, hard work and dedication.

At school, I was fortunate in that I did quite well in Maths all the way up to matric. I didn’t find it too difficult to understand new Maths concepts. I loved geometry and trigonometry, which many learners struggled with.

I remember some classmates telling me once that I was “so lucky to be so clever at Maths”. They thought me being able to quickly identify what had to be done in a Maths problem instead of struggling for twenty minutes, like they did, was simply amazing. To them, it was as if I waved a magic wand and, ta-da, forth came the solution.

What they didn’t realise was that I didn’t actually have some amazing talent at Maths. Yes, I mostly found it easy to understand new Maths concepts being taught, but I was certainly no Einstein. My classmates simply did not realise how many hours I invested in Maths.

My success most certainly did not fall from the sky. It was definitely not the result of some remarkable talent. It was the result of hard work when others were sleeping or having fun over weekends – not only for a week or even a month or two, but for quite a long time.

I once read that success is 10% talent and 90% hard work. I do believe this to be true. If I hadn’t worked hard at Maths, I would have achieved quite average grades. Instead, I chose to give my all – and as a result I did really well.

Don’t make the mistake of thinking that if you are able to grasp a concept quite easily, you have that section under control. You don’t. It takes a lot of practice to really master a concept and to be able to apply this in all sorts of scenarios.

Think of the world’s greatest sportspeople, for example. They don’t merely rely on talent and lounge about all day while waiting for their pay check to arrive. No, they spend hours and hours training every day – not only when a tournament or important event is coming up, but throughout the year. They prepare themselves for competing against all sorts of opponents using all sorts of techniques to try and outmanoeuvre them. And by doing all of this, they achieve success.

Success won’t ever fall from the sky. You will have to work for it. But it will be worth it in the end.

Just go for it.